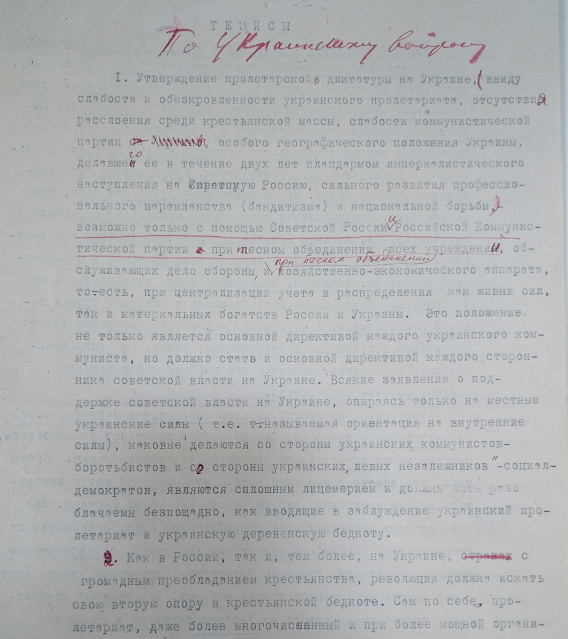 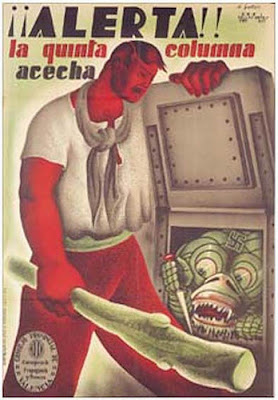 The Last War of Putin's Reich


Early in the morning of February 24, Russia unleashed a full-scale war against Ukraine. The 200,000-strong Russian army launched an offensive from the north, east and south, bombing dozens of Ukrainian towns and villages. Russian President Vladimir Putin calls this a "special military operation" with the goal of "protecting the population of Donbass" and to "denazify and demilitarize Ukraine". This is a blatant lie. For all its faults, Ukraine is a bourgeois democratic state, where citizens have equal rights regardless of nationality, and power is changed in elections, not transferred from one authoritarian ruler to another. The Ukrainian people have the right to determine their own destiny and defend their choice.

According to the Ukrainian Ministry of Defense, only during the first day of the war, on February 24, 137 military and civilian people were killed at the hands of Russian invaders, 316 people injured. At least three children were confirmed dead. Full casualty figures are not known by now. Russian cruise missiles and multiple rocket launchers, bullets and shells continue for the third day to kill and maim Ukrainians, destroying homes, schools, kindergartens and hospitals. 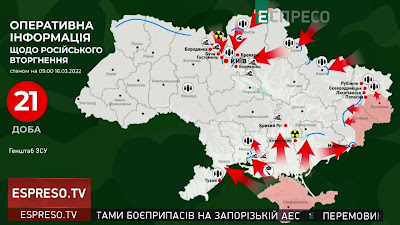 The Armed Forces of Ukraine and volunteers are waging a heroic struggle against the invader. In Kyiv the weapons are being distributed among people. Only during the first day about 130 combat vehicles, about 30 tanks, 7 planes and 6 helicopters of the Russian occupation troops were destroyed. According to the General Staff of the Armed Forces of Ukraine, losses of Russian personnel today amounted to more than 3,500 people, including about 200 Russian soldiers who have surrendered.

In Russia itself, thousands of people took to the streets to protest against the war and aggression in Ukraine. According to OVD-Info, police detained more than 1,800 protesters in the first two days.

Putin came to power in the wake of the 1999 Chechen war and has been rebuilding the Russian empire ever since, combining the traditions of Tsarism and Stalinism. At the same time, many Russian “leftists” supported and continue to support him in this. Even the last decision of the State Duma to recognize the puppet imperial enclaves of Donetsk and Luhansk “popular republics” (DPR-LPR) was adopted at the suggestion of the Communist Party faction.

The main obstacle to the restoration of the Russian Empire is Ukraine. Continuing the traditions ofthe Romanovs imperial state, Putin does not consider the Ukrainians to be a separate nation, but part of the Russians. Ukraine, in his opinion, is an invention of Russia's enemies: the Poles, Austrians, Germans, and Bolsheviks. In 2004, an attempt to bring pro-Russian President Yanukovich to power led to a massive outburst of popular indignation, the Orange Revolution, which marked Putin's first defeat. In 2010 Yanukovich managed to win the election and became the main agent of Russian neocolonialism in Ukraine. His corrupt regime was overthrown by the 2013-2014 bourgeois-democratic revolution, known as the Euromaidan. After several months of mass protests and barricade fighting in the center of Kyiv, Yanukovich and his entourage fled to Russia and turned to Putin for help. For the Kremlin, this served as a pretext for open military intervention, which led to the annexation of Crimea and the creation of puppet regimes of the so-called DPR-LPR. Over the past eight years, more than 14,000 people have become victims of Russian aggression in the Donbas, and more than a million people have become refugees.

When the Russian-Ukrainian war began in 2014, a significant part of the Russian, Ukrainian and Western left declared that they condemned both sides, because it was the same imperialist war between NATO (the West) and Russia as the First World War of 1914 -1918. As is well known, the conference of socialists in the Swiss city of Zimmerwald opposed that war and condemned it as imperialist on both sides.

But the current war is not a direct clash between the imperialist camp of the U.S. and the EU (NATO) on the one side and Russia and its satellites on the other side. Neither the US, nor the EU, nor NATO are fighting in this war! This war is imperialist and neocolonial only from one side - from the Kremlin, which is trying to reclaim its former part of the empire. Ukraine has its own rich history, language, and culture, despite being under the rule of the Russian czars for nearly two and a half centuries. In 1917 the Ukrainian bourgeois democratic national liberation revolution created the Ukrainian People's Republic. The Bolsheviks, having seized power in Russia, had to reckon with this and keep it in the form of a formally sovereign Ukrainian Soviet Socialist Republic, actually ruled from Moscow. The Stalinist regime organized a mass terror against Ukrainian culture and mass famine-genocide of Ukrainian peasants in 1932-1933, which took the lives of 3.9 million people.

Here it is entirely logical to draw an analogy with Ireland, which had also been under English rule for many centuries, and where the British authorities were responsible for the mass famine of 1845-1849. The Irish national liberation movement fought for independence for centuries, with the support of Marx, Engels and Lenin, and at times even the support of England's rivals among the powers of Europe, such as Germany.

Therefore, to transfer the Zimmerwald position to the Russian-Ukrainian war means to help Russian imperialism to rebuild the empire, to help the new Führer to build a new Reich in Europe. This is the false position of the Pseudo-Zimmerwald. 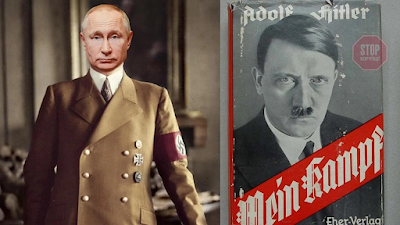 Like the regimes of Napoleon III and Hitler, the Putin regime ensures internal stability primarily through external expansion and militant chauvinism. The bloody wars in Chechnya, Georgia and Ukraine, unleashed by the Kremlin, led to massive civilian casualties. Until now, the Western powers have treated the Putin regime more or less loyally, as an equal trading partner or even an ally in the fight against "international terrorism."

But that time has passed.

An open full-scale war against Ukraine shows the world that the imperial ambitions of the new Führer cannot be satisfied or tolerated at the expense of others, for sooner or later he will come after you.

Whereas little Chechnya resisted Russian aggression for several years and cost the lives of some ten thousand Russian soldiers, Ukraine is ten times larger than Chechnya both in population, territory and potential. We are sure that the Russian Reich (which for some reason they call the "Russian world") will break its neck exactly in the war with Ukraine. This will be the last war of the Putin regime and the Russian Federation in its present form. It is it that today needs urgent denazification and demilitarization. Russian social chauvinists and social imperialists who support its bloody wars will also be buried under the rubble of this regime. And those who survive will be ashamed of it as the Germans are now ashamed of Nazism and Hitler.

For this, a great effort must be made by all who care about the fate of humanity. There is no other choice for the preservation of peace.

We call upon all socialists, workers and honest people of the world to demand that their governments:

- bring to trial the rulers of the Russian Federation, headed by Putin, as war criminals who unleashed an aggressive war and are responsible for the deaths of thousands of innocent people;

- expel Russia from the UN and other international organizations as a state that has violated the UN Charter by direct military aggression against other UN member state. Its re-admission to the UN and other international organizations is possible only after demilitarization of Russia, renunciation of its nuclear weapons, trial of the current criminal rulers of Russia and holding of democratic elections in Russia.

As well as to demand from the organizations of the Labor movement:

- expulsion of the Federation of Trade Unions of Russia and all trade union organizations supporting directly or indirectly the Putin regime from all international trade union associations;

- expulsion of all supporters of the Kremlin regime and its aggressive policies from international socialist organizations. 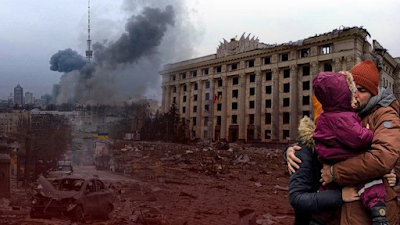 The situation in Ukraine remains tense. As of 1 p.m. on March 2, 2022, the Russian occupier continued to use heavy weapons and exterminate the civilian population.  So far, 21 children have been killed and 55 injured in the analysis of information from various sources since the Russian invasion of Ukraine.

As a result of the shelling, the infrastructure of the cities of Kyiv, Irpen, Kharkiv, Mariupol, Zhytomyr, Kherson and the settlement of Vasylivka in the Zaporizhia region was destroyed.

Thus, a maternity hospital in Zhytomyr was damaged during a missile strike by the occupiers.

At the same time, Russian troops continue to shell civilians in the Zaporozhye region.  Yesterday, at 9:00 am, the Russian occupation forces fired on the center of the village of Vasylivka, Zaporizhia region.  The shells landed in the yard of a local school.

Kharkiv and Kherson continue to come under heavy fire from the occupiers.

Tonight one child was killed and 6 children were injured in an air strike in Zhytomyr.  They were rescued from the basements of dilapidated houses.

Through their actions, the armed forces of the Russian Federation continue to cynically violate the fundamental rights of children - the right to life and health, guaranteed to every child in the world by the UN Convention on the Rights of the Child.

Some of these deaths could have been avoided if a no-fly zone was established over Ukraine.  I call on the international community and international human rights organizations to support the initiative to close the Ukrainian skies from enemy fighters.

Meanwhile, two triplets were born in a maternity hospital under shelling in Chernihiv.  As long as such angels are born in Ukraine, we are invincible!